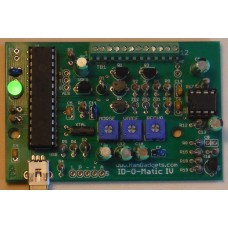 We now offer this controller completely built and tested for $69.95, see the listing next to this one. (THIS listing for $45.95 is a KIT, you must assemble yourself)
Other picture shows how IDOM4 fits inside optional ABS case with optional voice board (add those to your order if you wish)

introducing the NEW ID-O-Matic IV kit - A repeater controller with Morse and voice ID for under fifty bucks? Yes!

Voice Recorder Board WITH WIRES for IDOM4
$19.95
Add to Cart